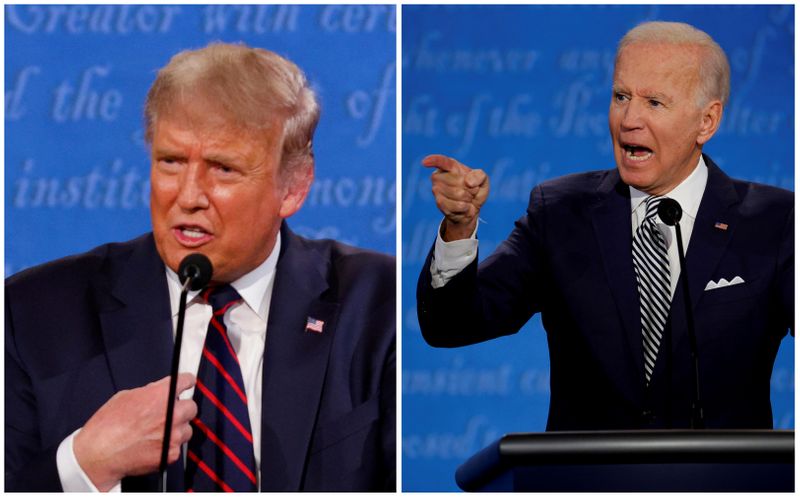 U.S. presidential election
The main event will be U.S. election day on Tuesday. It is set to be one of the most significant presidential elections in the history of the country. The election campaign has been particularly fraught due to coronavirus, and the focus on the immediate aftermath amid fears that a period with no clear picture on the outcome could roil markets.

President Donald Trump, who is trailing Democrat challenger Joe Biden in polls, has complained about a "rigged" voting system and refused to commit to a peaceful transition of power if he loses.

The president has played down the virus, as the country has recorded more than 9 million cases, with nearly 230,000 people dead.

A huge amount will also depend on the outcome of the vote for representatives in Congress. If polls are correct and Biden wins in a “blue sweep” with Democrats securing both congressional chambers it would bolster the outlook for rapid and large-scale fiscal stimulus.

Wall Street
Wall Street's three main indexes recorded their worst week since March last week dragged down by a slide in shares of tech heavyweights following their quarterly results, with a record rise in coronavirus cases and jitters over the presidential election adding to the downbeat mood.

The VIX volatility index, Wall Street's "fear gauge," ended the week near a more than 4-month closing high and market volatility looks likely to remain elevated in the coming week.

Fed meeting
Fed policymakers will begin their latest meeting a day later than usual on Wednesday because of the election. They will deliver their policy decision on Thursday at 1400 ET, followed by Fed Chair Jerome Powell’s press conference 30 minutes later.

Officials are expected to hold off on announcing additional stimulus measures, but they may keep open the possibility of adjusting the bond purchasing program at a later date, possibly as early as December. Policymakers are also expected to reiterate that fiscal policy is a more effective tool right now, amid an uneven recovery from the coronavirus induced recession.

U.S. jobs report
Friday’s jobs report is expected to show another small decline in the unemployment rate and payroll gains are likely to show a further loss of momentum in private sector job creation, while the winding down of the Census is set to result in a drag from government employment.

Before that, Thursday’s initial jobless claims report will also be closely watched. Though claims have dropped from a record 6.867 million in March, they remain above their 665,000 peak seen during the 2007-09 Great Recession.

About 22.7 million Americans were receiving unemployment benefits in early October, though many have exhausted their eligibility for state aid.

Bank of England meeting
On Thursday, the BoE is widely expected to increase bond purchases by 100 billion pounds to support the economy through another wave of coronavirus and Brexit. It would bring the central bank’s asset-purchase target to 845 billion pounds, almost double the level at the start of the year.

Policymakers are also expected to downgrade growth forecasts for 2020 and 2021 and indicate that the recovery is likely to take longer than their previous forecasts had assumed.

The central bank will likely skirt questions on whether interest rates could be cut below zero, pending a review of the impact negative rates would have on banking sector profitability.